What is hearing and listening?

Auditory function is broadly described as the ability to hear and listen. Hearing is a passive sensory process where a person detects sound. Generally, a person does not have to try to hear something.

Listening, however, is an active process involving detection and interpretation. A person must actively attend to and discriminate different sounds, particularly speech.

The ability to hear and listen provides us with an enormous source of information and forms a bridge between the world and how we interact with it. In school, hearing and listening allow a child to maintain a high level of concentration with little effort, communicate effectively with instructors, and register information accurately. In social situations, listening allows us to participate in conversations and interact with others in both loud and quiet settings.

Most children after these surgeries will pass a typical pure tone hearing test (given while the child is wearing ear phones so that information can be assessed for each ear) because the auditory cortex in the single temporal lobe of the remaining hemisphere of the brain can assess the single tone given separately in each ear during the test; however, when this single temporal lobe is required to process sounds coming into both ears at the same time, problems arise. Many children struggle with central auditory processing disorder, hyperacusis, or misophonia.

The risk of central auditory impairment

Central auditory processing disorder, sometimes known as cortical auditory impairment, is a condition where the brain is unable to process incoming words or sounds 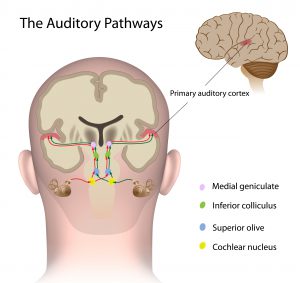 Research shows that children after these surgeries will do well on the “sound in quiet” portion of the Hearing In Noise Test (where they listen to different environmental sounds and words, without ear phones, in a sound-proof booth); however, when there is competing noise from the environment (“sound in noise”) or environmental sounds or words coming into both ears at the same time, hearing and listening are impaired.

Dichotic listening is the ability of the brain to understand different words or sounds coming into each ear at the same time. For example, research shows that after hemispherectomy, the ear opposite the removed hemisphere is extinguished during dichotic listening tasks.

Sound localization is the brain’s ability to recognize where sounds are coming from. After hemispherectomy, this ability may be greatly impaired. One study found that adults who had hemispherectomy in childhood were completely unable to perceive auditory motion.

Examples of auditory motion would include the sound of a moving vehicle in the street, creating a significant safety risk for the child.

Central auditory processing challenges can present a serious problem for children after these surgeries in an educational environment. For example:

Because a child after these surgeries typically has good auditory recognition of spoken words in a quiet environment, a quiet educational environment is recommended during times of academic instruction.

Because a child after hemispherectomy or similar surgeries usually seems to hear just fine, and typically passes a pure tone hearing test, central auditory challenges can go unnoticed. This can be problematic on many levels.

One particularly dangerous situation is where a child may be unable to localize sound properly – when they attempt to cross the street and cannot hear the direction an approaching vehicle is coming from, coupled with the visual impairment, there is a serious risk of injury.

When learning to read, the child may be unable to associate the appropriate sounds a letter makes, making phonemic awareness and phonological awareness difficult to learn. and to read a significant challenge, or they might be trying to learn in a classroom with too much noise for them to be able to properly interpret the information given by the teacher.

Hyperacusis is an extreme sensitivity to certain frequencies or volume ranges of sounds. Anecdotally, many parents report that their child is hyper-sensitive to loud noises such as dogs barking, fire engine sirens, and books slamming onto the floor.

Although case reports are absent in the research literature, anecdotal reports from parents establish that many children are hypersensitive to certain common environmental sounds after hemispherectomy surgery. Sounds of rustling papers, squeaky doors, or the hum of an air conditioner may be problematic for the remaining half of the brain to process, causing the child distress. 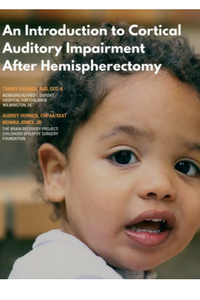 What is dichotic listening?

Dr. Frank Musiek, PhD, CCC-A, and Director of the University of Arizona’s NeuroAudiology Lab discusses how hemispherectomy surgery affects the brain’s ability to process sounds and words at the 2016 Hemispherectomy Conference and Family Reunion. You can download the presentation slides here: Hearing After Hemispherectomy

How the ear works

This video is a great primer on how sound travels from the environment through the inner ear. Although it does not discuss auditory processing challenges, it provides an excellent introduction to the workings of the inner ear. (With permission from Javitz 3D.)

The following are actual assessments of children after epilepsy surgery. We provide these as an example of what a good evaluation will include. 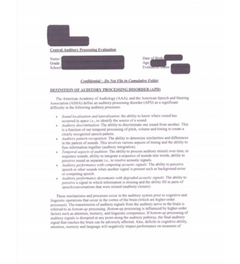 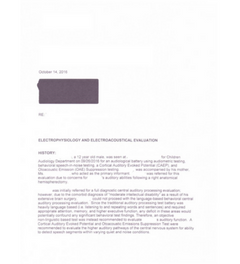 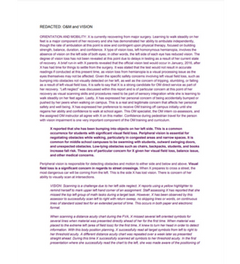 Pages: 1 2
We use cookies to offer you a better browsing experience, analyze site traffic and personalize content. If you continue to use this site, you consent to our use of cookies. Find out more.