Epilepsy surgery is any type of brain surgery where parts of the brain are removed, disconnected, destroyed, or stimulated to stop seizures. There are many different types of epilepsy surgeries. Which procedure is used depends upon the type of seizures presented, where they are localized in the brain, and the training and experience of the neurosurgeon.

The purpose of these procedures is to stop the seizures completely. They include: 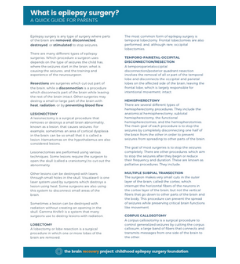 WHAT IS EPILEPSY SURGERY? A QUICK GUIDE FOR PARENTS

This brief guide introduces you to the various surgeries to consider to stop drug-resistance seizures in childhood.